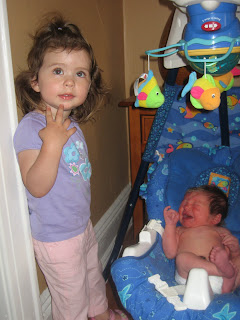 I've now posted the June Gallery, so you can get some more looks at Quinn. Lyla had a whole lot of fun before he was born, too. Most important was her trip to the Dora and Diego exhibit at the Children's Museum. She and her friend Lilly had a great time. We also spent an afternoon at Lyla's friend Zoe's house and the kids had a great time splashing around in the kiddie pool.

Once Quinn came, we had a few visitors coming to check out his already legendary head of hair. More will be coming soon as his bris is planned for Thursday. Lyla loves her little brother very much. We can tell, because she says "I love baby Quinn very much." It's much easier to understand her now that she can talk. She also has been telling her momma and daddy that she loves them quite a bit for the last month or so. She also exclaims over Quinn with comments like, "He so tiny!" and "He so cute!" So far, so good.

Mom and Dad have tried to have some one on one time with both of the kids, though the options are limited. Lyla has gone to the local playground quite a bit lately and even put on a show for Daddy.

Posted by Unknown at 6:33 AM No comments: 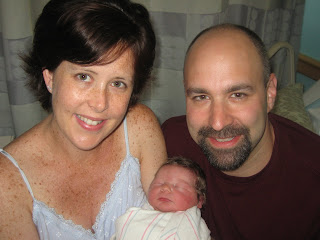 QUINN BARRY BLACK
Today, Erin and I welcomed Quinn Barry Black into the world. For those of you who don't know, Barry was my father's name and I am thrilled to be able to carry on his legacy in this beautiful little boy.

We went to the hospital today for a scheduled induction and everything went very smoothly. As the experienced parents that we are and under the circumstances of a scheduled delivery, we were very casual about the process. This led to a comfortable and relaxed experience. All of the nurses were very friendly and Erin's doctor who was delivering was fantastic. After what amounted to about 4 1/2 hours of "hanging out" once the process was started, Erin was ready to start pushing. Three pushes and about 45 seconds later, Quinn was out and clearing his lungs with a nice, healthy wail and a full head of dark hair. Quinn measured in at 8 lbs 4 oz and 20 inches long at 1:35pm.

He nursed happily soon after and then went to sleep. Once we moved up to the post partum area, he wanted to keep on sleeping. He barely opened his eyes the whole time, but we got little glimpses of them. By the time Uncle Arthur came to visit (and bring us dinner), Quinn's hair had developed a frosted California-style look to it. We're not sure how exactly that happened.

I'll head back in to the hospital tomorrow and Erin's doctor said as long as the pediatrician signs off on Quinn, we should be able to all come around 2:00pm tomorrow!
Posted by Unknown at 10:57 PM No comments:

Wildlife Conservation Membership Has its Privileges 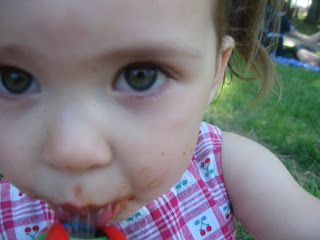 After Lyla determined she wanted to go to the zoo one fine Saturday morning, we packed up and headed out to the Central Park Zoo. While we were there, we decided to join the Wildlife Conservation Society. As members, we can get unlimited admission to New York zoos and the Aquarium. (and other discounts) So the next weekend, we went to the zoo again. Then the next weekend, we went to the aquarium. We're hooked!

Lyla loved the polar bears the first weekend and the next weekend had a great time in the petting zoo the next weekend, but was more interested in monkeys than polar bears. The aquarium was new and different and Lyla was very excited and loved running from one exhibit to another and look at the animals... until the Baby Walrus, suddenly and without warning descended from the top of the tank right in front of Lyla's face. Her fear and shock were, dare I say it, hysterical. Of course her mamma and daddy were there to comfort her, but we couldn't help laughing... a lot. After that, unfortunately, Lyla wasn't as interested in any of the bigger animals, like the seals, and pretty much stayed away from the large tanks. Small fish were fine, but really, she began to prefer the pictures on the wall over the animals in the small tanks.

When not at the zoo and the aquarium, we like to go out for brunch, have guests named Kate visit (only 2 this month) and hang out in the park.

The May photo album is now complete and I'll start working on June... which will definitely include the first pictures of the newest Black baby! He's currently scheduled to appear on June 12th, but if it's sooner, we'll let you know!
Posted by Unknown at 9:13 PM No comments: