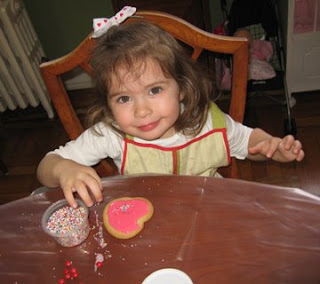 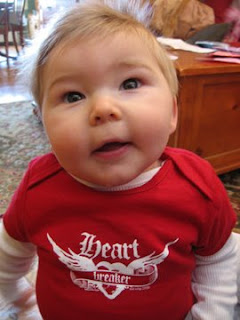 Much love from the Black family!

Quinn has been starting to roll from his back to his belly a bit more than he was before. He rolls just fine from his belly to his back. He actually has been hanging out on his side quite a bit. In addition to pureed baby foods, he's starting to eat finger foods, though he doesn't get them from the tray to his mouth on his own so well. He tries to take every food that Erin and I are eating, though. It doesn't matter what it is, he'll put his hand out for it, even dragging our dinner plates toward him and shoving his hand into whatever is on the plate... like ketchup.

Lyla has been cracking us up on a regular basis. She definitely has a mind of her own and loves singing songs, dancing, drawing pictures, painting and making up stories. Best of all, Lyla regularly uses the potty! It seems the key to training was telling her she wouldn't be able to go to school until she was potty trained. It's pretty clear we are raising a nerd.

We needed to pretty quickly add that she also needs to be three years old and she can't start until the fall session, but she didn't seem to mind that so much. We also got to check out her future preschool on a visiting day and it seems like she'll be very happy there come September.

January brought a lot of family birthdays, including Grandpa, Mima, Bubbe, Aunt Bevy and, of course, ME! Lyla loved singing Happy Birthday as much as she could. On my birthday, Erin and the kids brought me breakfast in bed, which was an unexpected and fantastic treat.
Posted by Unknown at 10:18 PM No comments: