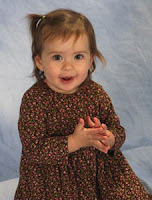 Well, another year has passed (and a week and a half beyond that, but who's counting?) and it's pretty astounding to me to look back through these blogs and the pictures of Lyla and see how much she has changed. At the beginning of 2007, she had no teeth and wasn't even crawling around. Now she's got teeth aplenty and loves to run all over the house. She's gained about 10 lbs and around 6 inches. She's gone from wrestling elephants to double fisting guacamole. Her formerly short hair is long enough now that Erin can turn her into a sprout head. She's now talking up a storm and can often let us know exactly what she wants. She is particularly fond of blueberries, Sesame Street characters and babies (usually dolls).

We were really busy during the end of the year and I didn't have time/energy to get this blog updated, so I'll cover that ground now and then try to play catch up with our recent events sometime soon. We went to Wisconsin at the end of December to spend Christmas with Lyla's Grandma and Grandpa, Aunt Erin and Uncle Ryan and cousins Keira and Will. During our trip we also got to celebrate Keira's birthday with her and her Grandpa Dave was nice enough to give Lyla a photo session in his studio with some pics with Keira and Will. I've got a whole bunch of those pictures up in Lyla's photo shoot gallery. 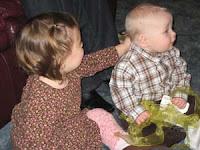 Keira and Lyla always have a blast together and Lyla just loves her baby cousin, Will, which makes us very hopeful that she'll be as sweet with her sibling, even if he or she pulls Lyla's hair or takes up space on her mamma's lap.

We took Lyla out in the snow for a bit, but she wasn't particularly thrilled with it. She did like when I would throw snow around and hit her mom with snowballs, but she cried when I plopped backwards into the snow. She didn't quite understand that I was just making snow angels and seemed to think something bad had happened to me. She definitely didn't want to be lying down in the snow and wasn't too happy about even standing in it at first. She eventually warmed up to it a bit, but the weather cooled down as the sun fell and we needed to head inside.

I've got more pictures from the beginning of December all the way through to New Years in the latest Gallery. Unfortunately, I didn't get any pictures during our little New Years party and due to various illnesses, we were down to 4 kids and 7 parents, but it was still a nice way to say goodbye to 2007.

You might want to turn down your volume before checking out the video below. Keira gets a little loud after 4 Christmas cookies...

In case you missed any of the past videos, I've put them all on one page for your viewing pleasure and I'll try to update it as we go along and maybe try to make it look a little nicer, too.