On Our Way to Thanksgiving... 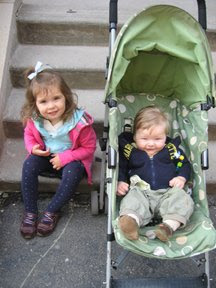 Lyla and Quinn at the polls on Election Day
First the plug! Erin has an online store at www.blacksrock.etsy.com. It's a great location for holiday shopping for you and every single person you know, so get the word out! Don't make your friends, relatives and passing acquaintances lose out on the best holiday gift opportunity of their lives.

The problem with not updating on a regular basis is that I forget the millions of little cute things the kids do day-to-day that I think I should update. I updated the October picture gallery a few weeks ago, so don't forget to check for new pics, even if I don't get a blog update. I previously had the pictures up from our local Halloween parade and then I added the pictures from Halloween proper.

For those of you who didn't hear, Quinn and I had a brief appearance on the Today Show. Quinn was modeling a "Last-minute Halloween Costume" for Scholastic Parent and Child Magazine. If you didn't get to see it on Halloween, you can check out the video clip online. Erin and Lyla were with us, but didn't make it on camera, even though Lyla was wearing her adorable flower outfit. One of the camera men trained his camera on her, but it didn't make it to the show.

Quinn had his 5 months doctor's appointment on Nov. 14th and measured in at 27" (90th Percentile) and 15lbs 14oz. (50th Percentile) We've started feeding him his first solid foods. He didn't react very well to rice cereal and spent much of the night crying the two nights we gave it to him, so after a break, Erin switched to oatmeal cereal and he seems to like it a lot and hasn't had any stomach issues with it. Aside from his fickle eating habits, Quinn is doing very well.

He's a very happy boy. His smile and laugh can light up the room. Every day when I come home, he watches my every move until I look at him and then he smiles wide and laughs. Erin says it might because he thinks I'm ridiculous. She may be right.

Lyla still loves the heck out of her brother. Sometimes she likes to crawl right on top of him while he's lying on the ground to hug him. That can be a little bit scary, but it's all about the love. She also looks out for him. When Erin has Quinn lying on the ground to strengthen his muscles and learn to turn over, he sometimes gets upset and cries with frustration. Lyla pleads with Erin to help him, because he's so little and needs her help. Leaving him be is paying off, though as he turned from his back to his belly for the first time just a few days ago. He had turned from his belly to his back awhile ago, but doesn't really seemed interested in doing it so much anymore.

We're getting ready to head up to Massachusetts for a week. I'm going to work out of our company's office in Watertown for a few days leading up to Thanksgiving, so we have some extra time with family and aren't so rushed over the holiday weekend. The day before we go, Erin will be selling her sweaters and puppets at a craft fair in Manhattan. But since you probably won't be able to make it, don't forget to check out the store at www.blacksrock.etsy.com
Posted by Unknown at 8:06 PM